Lately, I have been getting some strange looks when I go out to public events like gallery launches, theatre symposiums, or conferences. I even occasionally get ‘looks’, quiet ‘tut-tuts’, and even shushes accompanied by glares. I look around, wondering what manner social faux pas I appear to have committed. Then, looking over my shoulder, I see a small child strapped to my back.

Why am I getting this reaction? What is the social or behavioural expectation I am transgressing?

I was an activist, theatre maker, and ardent feminist before I had kids, and my passion for equality and desire to work towards a fairer and more equitable society has only deepened since I have become a mother. If have a toddler with me, it’s not because he is an adorable fashion accessory (he is of course, everyone says so), or that I cannot bear to be separated from him (love him dearly, but no). The reason is, like many people, I struggle to pay for even part-time childcare. Which means during the day on a Monday or a Friday, if I want to work or participate in a public event, I must bring the little guy with me. 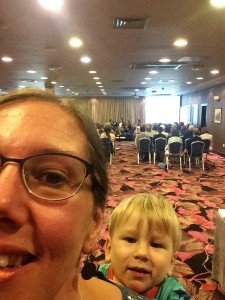 When he was smaller it wasn’t an issue, people seem to be easier around babies. Especially if they are being breastfed. But since he has been walking and talking, I have been getting some negative responses.

Something happened one Friday that really woke me up!

I was invited to the National Women’s Council of Ireland event on Friday the 9th of September. I was pleased to be there as an individual member, and also representing #WakingTheFeminists and MAM (Mothers Artists Makers).

On arrival, I was told that having my child with me shouldn’t be a problem, but they would appreciate me stepping out of the room while the Minister was giving the keynote address. The same person checked that I did actually leave the room after the Minister arrived.

So there I was, following Minister Frances Fitzgerald’s keynote speech on the Twitter feed, from outside the door. It was only when the Minister began speaking about the impact of childcare on women’s ability to participate in public life, that I awoke to the irony of the situation. I was outside the door at a public event that I had been invited to, following the keynote address on social media, because I had a child with me.

That this happened at the National Women’s Council of Ireland’s launch of their strategic plan; a plan that highlights access to childcare as one of the successes of the past year, somehow moved my experience beyond even the realm of irony. 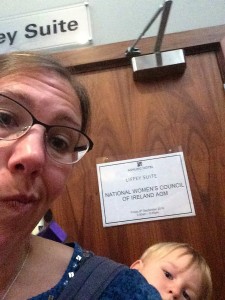 in all their diversity are heard.”, and their vision is “of an Ireland and of a world where women can achieve their full potential in a just and equal society”. Shouldn’t a diversity of views include the 54% of women in Ireland who are mothers?

It is hard to have your voice heard or realise your full potential through a closed door.

Now I will clearly state that I do not believe this incident represents the views and policies of the NWCI. Overall, when I was in the room, I felt welcome and included in what was a very positive and exciting day.

But when this happened one Friday, it woke me up to the underlying tension that exists  within feminism around the great unresolved….Motherhood!

The event brought home for me an awareness of the underlying assumptions that made it possible, and even reasonable, to ask a member of an organisation to leave the room during the keynote address, simply because she had to bring her child with her. These assumptions affect me, as much as the person who asked me to step-out and those who were aware and said nothing.

For all that I am an activist, I did not protest. I took it for granted that by bringing my child, I was being awkward and inconvenient. I was eager to accommodate to organisers and grateful to be allowed to be there at all.

I was actually asked to leave the room a second time at the NWCI launch, while Senator Lynn Ruane was passionately speaking about the matriarchs of her working class community, working like hell to raise their children and grandchildren while keeping food on the table. Needless to say, with Senator Ruane’s words ringing in my ears, I politely declined to leave the room a second time.

I really don’t want to be a walking political provocation, just because I have no choice about bringing a child with me. But provocative is how I feel when confronted with requests to leave the room, with looks, tuts, and glares.

I have become an unpleasant, involuntary act of the body politic.

My mother took me to an anti-nuclear demonstration when I was three, and many 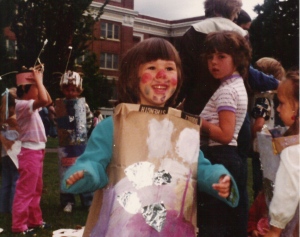 environmental and feminist events thereafter.So I have been an activist my whole life. I grew up feeling that I had a voice, and a responsibility to work for justice and equality. As a theatre maker, I have worked to create positive social change for a range of marginalised groups, including women.

I am cheerfully raising future feminists (both male and female), why does that make me an awkward inconvenience? Both my children are curious and sociable. They enjoy being with groups of people, and I think it is brilliant that both my children have the exposure to public life that I enjoyed and benefited from so much myself as a child.

So why, last Friday, was I left outside the door for the keynote address at the National Women’s Council launch of the #Feminist Agenda?

The NWCI has made great strides for women in recent years. There are many policies that 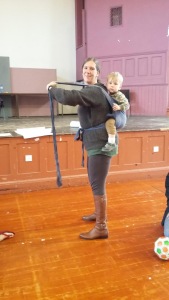 support the inclusion of women who are breastfeeding. We now have a second ECCE year for pre-school children. Yet, there is still the expectation that when it comes to public life, children should neither be seen or heard. And without adequate childcare or provision for children at events, that extends to their parents as well.

This is not just an issue for parents of young children, there are many long years where the school bell calls women and men away from work and public life to the school gates.

Feminism has long struggled with issues and impact of motherhood.The same anxieties and tensions are reflected in wider society. In Ireland, women are still the primary care givers, both for children and other family members. This work is perceived as low status, often voluntary, unpaid or low paid. There is a history within feminism of wanting to disassociate from the traditional role of motherhood, and the lack of autonomy within the conformity to social norms that it can represent.Historically, women in society have been controlled through their reproductive capacity.In Ireland, one only has to think of the legacy of the Magdalene Laundries, lack of access to birth control and the on-going legislative control exercised by the 8th Amendment over women’s bodies, to understand why feminism has stayed away from motherhood and the social disempowerment it can still represent today.

But feminism is about expanding the possibilities for women, not limiting them. Women are still disappearing from public life. if that is to change, we need to change how we view motherhood and start supporting women who have children to participate fully in public life.

So let me ask the question, what has to happen before we stop asking mothers to ‘step out’?

Imagine a conference with a small play area in the foyer, or at the back of the room.

Imagine older children being able to participate in events that will shape the world they grown up in.

Imagine that we include the full range of voices and experiences of our society in public discussions.

Imagine a world where women do not disappear from public life when they have children.

Kate Harris is the director of 4elements theatre company

She is on the research groups of MAM and WTF

We are a group of feminist mothers, with a background in theatre, who are now meeting once a week and talking regularly online. We run on a voluntary basis & communicate via a closed group on Facebook. Read more on this site about why we set up & what we want to do.